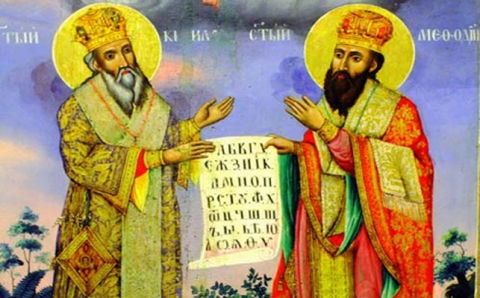 May 24th is celebrated in Bulgaria as the day of two saints: St. Cyril and St. Methodius, of Bulgarian education and culture and Slavonic literature. It is a widely observed holiday in the country, on par with Liberation Day (March 3) and Christmas. It is a day largely devoted to celebrating the creation and the existence of the Cyrillic alphabet, which Bulgarian is written in.

Bulgaria may not be the largest user of Cyrillic today, but it is the first. The Cyrillic alphabet was the official script of Bulgaria before it was spread to Russia, Croatia, Serbia, etc. and it was Bulgaria’s Boris I who commissioned the two literary schools where thousands of monks would be educated and the first thousands of books in the new alphabet would be hand-copied and spread across the land.

It may be strange to see such importance placed on a set of symbols that we take for granted, but there is a great reason for our fascination with our letters, and a great accompanying story: the story with the greatest cultural significance in Bulgaria’s history.

*NB: this is an edited re-post, originally dated May 23, 2012.* When khan Boris ascended the Bulgarian throne in 852, he came to command a nation that spread over land equivalent to modern day Germany, rich in military power and economic might. However, in the eyes of all the Christian nations in Europe, he was at the head of a barbarian state. Bulgaria was pagan, and while it remained so, treaties made with it could be broken and it would always be treated as inferior. Boris decided that adopting Christianity was the only way to make his country an enduring European power. In 862, as the result of a well-orchestrated dispute between the Pope in Rome and Constantinople’s Patriarch, Bulgaria was granted the status of an autocephalous church, meaning it would have a Patriarch of its own who would report to neither, and Boris was styled with the Christian title Knyaz. He brutally quelled a revolt against Christianity taken up by the majority of his court and by 865 Bulgaria was on its way to full baptism at the hands of Byzantine monks. However, this favourable result led to a serious problem: the Byzantine empire, Bulgaria’s principal foe over the preceding two centuries, was gaining a cultural foothold in Bulgaria. The Slavonic language in use in Bulgaria had no writing system of its own, and the state’s administration was already being conducted in Greek. When Greek-speaking missionaries began preaching in Greek from Byzantine holy books to his people, Boris became genuinely concerned that Bulgaria would become a cultural outpost of the Byzantine empire, and would eventually be absorbed by it despite its military strength.

In the meantime, in 862 prince Rastislav of Great Moravia, a Slavonic kingdom in Central Europe, asked Byzantium to send him missionaries who could preach in Slavonic for the benefit of his subjects. Emperor Michael III, believing that a Slavonic translation of the Bible would spread Byzantine influence faster to his largely Slavonic-speaking neighbours, tasked with the mission two brothers, monks, half-Slavonic by birth, named Constantine-Cyril and Methodius. The two devised an alphabet to encompass the 26 consonants and 18 vowels of the Slavonic language, translated the Bible into Slavonic using the alphabet they called Glagolitic, and began preaching in Slavonic in Great Moravia. This was technically heresy since the Sacred Scriptures recognized only three “holy” languages for the Bible: Hebrew, Greek and Latin. The brothers were challenged to a debate in Venice in 867 where Constantine-Cyril spoke fervently and convincingly in favour of allowing other languages into the canon. In 868 in Rome Pope Adrian II confirmed the legitimacy of the brothers’ work, placing their books on the altar at St. Peter’s basilica and making Slavonic an official language of Christianity. Constantine died in Rome that year but Methodius returned to Moravia as archbishop to continue spreading the word of God in Slavonic. Unfortunately for him, popes changed and by 885 the Holy See in Rome had realized that Moravia was slipping from its cultural grasp and demanded that it return to preaching in Latin. Fortunately for him, Methodius died on April 5, 885, days before the papal edict calling for the immediate imprisonment of him and his students arrived in Moravia. His disciples, some 200 of them, were jailed and sold as slaves to the Franks. All except five, that is. Five disciples of Cyril and Methodius, versed in the already sanctified Slavonic version of the Holy Bible and a corresponding alphabet custom-made for the Slavonic language somehow found their way to Bulgaria, into the open arms of Knyaz Boris I. Two of them, Clement and Naum, founded literary schools and created a simplified version of the Glagolitic alphabet that they named, in honour of their late master, Cyrillic. Historical theories diverge as to the five disciples’ stories. Some cite the great providence that, escaping by some freak accident from their Moravian jailers, these five monks fashioned a raft and sailed across the Danube, seeking sanctuary in Bulgaria and appearing miraculously to answer Boris’s prayers for a Slavonic Bible and alphabet. Others believe that the five were ransomed by Boris for that specific purpose. Some even go as far as to claim that Cyril and Methodius themselves were aligned with the Bulgarian cause (was their Slavic mother perhaps a Bulgarian noble?) and were working on a decades-old plan of Boris’s to make Slavonic a recognized holy language and to give it an alphabet. We may never know the truth, but the fact is that during Boris’s reign:

By any combination of diplomatic genius and blind luck, that was an impressive royal resumé that got Boris I sanctified and ushered in the Golden Age of the First Bulgarian Kingdom.

The language of Cyril and Methodius’s translation became known as Old Church Slavonic and, coupled with the Cyrillic alphabet, eventually spread from Bulgaria to Croatia, Serbia, and to Kievan Rus, the predecessor of Russia. Today, Cyrillic is used by 252 million people in 12 countries, is the third official script of the European Union and has been the original script of some of the most influential literature in world history. To Bulgarians, it means independence of thought and of language, of identity and expression. On May 24, we remember a time when alphabets were not easy to come by, when having one could mean the difference between cultural growth and assimilation, and we appreciate the letters that have preserved Bulgaria’s identity throughout history and the men responsible for their existence.

You are currently reading Celebrating Cyrillic at Blazing Bulgaria.