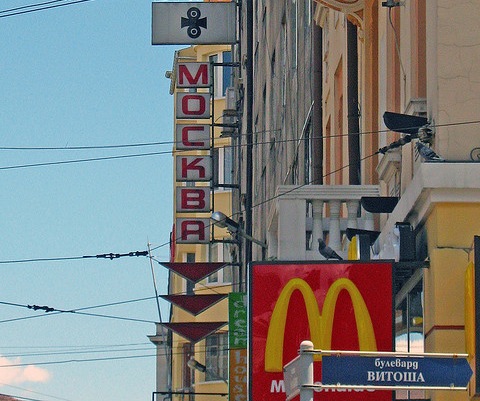 In August of 2010, I had just arrived in Sofia for a month-long stay in Bulgaria. I’d rushed out to buy кисело мляко, сирене and лютеница, to have a taste of authentic Bulgarian things, and I was excited to participate in a ritual I like to call The Walk.

The Walk essentially consists of my taking the trolley down to Sofia University and strolling through all the places in the centre of the city that I want to refresh in my memory. It is a slow, leisurely affair, notably because usually it’s undertaken in the scorching summer heat, and it serves to suffuse me with the understanding that I am, indeed, home. You will see many of these landmarks in future posts if you haven’t already, but they include the yellow cobbles, the National Theatre (where I spend a good half an hour admiring it and wondering what might have been if I’d been a superfamous actor slash director slash sex symbol person…but I digress) and a dozen other known and unknown places that really ground me, telling me “Yes, you are in Sofia”.

On this particular walk, I had an extra three hours to kill as I was waiting for a text message from a very flaky friend to meet up somewhere. I was standing outside the National Library, having barely begun the walk, when I noticed, just below the statue of St. Cyril and Methodius, a man and a woman in their 50’s with their noses buried deeply into a photocopy of a map of Sofia. Sofia, with its layers of radial/random street layout and long Slavic street names, is a tricky place to navigate at the best of times, let alone from a faded Letter-sized photocopy of a map. So, I approached the couple, taking a gamble that they spoke English, and asked if they needed help.

I take a small pang of pride when I surprise foreigners in Bulgaria with my barely-accented English. They lit up at the sound of it and asked me…where the National Library was. We started talking and it turned out they were Scottish, on an all-inclusive somewhere in the mountains, and they had one afternoon set aside to see Sofia. Not having anything to do, I offered to show them around. Kids, ordinarily, accepting such an offer from a stranger on the street is not necessarily advisable, but I was bright-eyed and young and clean-shaven and spoke excellent English, so they took the gamble.

I led them more or less along The Essential Sofia walk, injecting tidbits of knowledge and history as we went. They were very impressed, commenting on the scale and cleanliness of those parts of the capital to my great delight. We saw the changing of the guard at the presidency and I floated by the idea of the Archaeology museum, which was met with lukewarm enthusiasm. It was getting on 3 pm, so we decided it was lunchtime. I led them down to the National Theatre, coming out at the top of the Slaveikov book market, racking my memory for this amazing authentic Bulgarian place I’d been to a few years before (which, by the way, is called Мечата дупка, “The Bear’s Lair”, and is located at 5 Graf Ignatiev street). I couldn’t seem to find it, so I started looking for other options in the area. Then I casually mentioned something my cousin had told me: they had opened a Subway sandwich shop further down on Graf Ignatiev and they lit up like Christmas.

I understand them now, these poor people, in their one day of non-tour-guided adventure in a foreign country, sweltering in the August heat instead of hiking the Scottish munroes or resting in the mountains..How comforting the notion of a Subway restaurant must have sounded – a known quantity, a cheery, air-conditioned green oasis of familiarity…

At the time, I felt rather differently. Surrounded by Subways and McDonald’ses and malls back in Canada, I was seeking an entirely different kind of familiarity and, of course, I was eager to show off Bulgarian cuisine. So I dismissed the idea of Subway and we compromised, settling into a German-style biergarten on Rakovski str. We got beers, he adventurously ordered шопска салата (shopska salata) and she ordered apple pie. Familiarity is a funny thing.

Bulgaria had been behind the Iron Curtain for 45 years. We had licensed Coca Cola at some point, and it was available in special cafés on special occasions, but the first fast food chain restaurant only arrived in 1994 when a McDonald’s was put in in Plovdiv. Soon after that, two were built in Sofia and they became the talk of the city – huge lineups in the first few months, families celebrating birthdays and special occasions in the new, shiny, exotic bastion of American culture…what a novelty! In a country with a thousand authentic Bulgarian restaurants and three McDonald’s, they became the exciting thing.

Of course, their lustre dimmed for me when I moved to Canada and discovered that they were not only everywhere, but their quality was generally rather lower than what I’d seen in the one flagship restaurant in Bulgaria. Then, belatedly, I longed for the thousand restaurants back home.

UPDATE: I did walk into Bulgaria’s first McDonald’s, in Plovdiv, not long ago, and was thrilled to discover that alongside the standard McDonald’s fare, they do offer some local varieties. For instance, I had a Zorba burger (feta cheese, cucumber, garlic sauce) with cross-cut fries “di mare” and a beer, which was not too terribly shabby.

Even the most hardcore travellers may find themselves homesick, or unimpressed with the local cuisine, or just aching for a Big Mac and Coke. I have done it too, scanning early morning Prague for the golden arches one fateful morning before a flight, and so I give you, fellow travellers (with a special nod to that patient and wonderful Scottish couple), the map of international chain restaurants and American-style malls in the centre of Sofia.

§ 5 Responses to The Comfort of Familiarity…and Big Macs (Updated)

You are currently reading The Comfort of Familiarity…and Big Macs (Updated) at Blazing Bulgaria.