Standing at 2376 m above sea level, Botev is the tallest peak in Stara Planina. It lies within the boundaries of national park “Central Balkan” – a beautiful natural reserve protecting 72 000 hectares of natural beauty. Botev peak is a popular hiking destination and can be reached via one of several routes, most of which are suitable for beginners. This part of Stara Planina is very picturesque: rocks and imposing cliff faces give way to cool forests, grassy pastures transition into shrubs and every peak offers a unique and marvellous vantage point.

I’ve been to Botev peak twice, always with the indomitable Topcho. The first time we were led by a wiry, seasoned mountaineer who completely put us to shame – she was so quick and light on her feet before our disbelieving eyes. The second time we were the seasoned ones, when we had the chance to hook my sister on the hiking craze, despite the fact that she’d never been on quite so long a hike before. We’ve followed two separate sets of routes and we had the chance to see most combinations of paths to the peak and back and to ensure they were picturesque, no more dangerous than anywhere else in the mountains and overall suitable for beginners. In this article I will detail the possible starting points for a trek up to Botev peak, the mountain lodges and other landmarks along the way, as well as eight separate segments which can be combined to form any number of custom routes. Finally, I will detail two sample routes, which have been verified by yours truly to be doable.

Karlovo – a relatively large town with a rich history and well organized transit. Can be reached by coach bus from Plovdiv or by train from Sofia. The railway station and the bus terminal are very close to each other in the Southern end of the city. Karlovo is the preferred end point to my routes, but it works as a starting point as well.

Kalofer – the coach bus from Plovdiv stops at the turn-off about 1 km from the town, but the climb from here is generally the easiest and the most pleasant.

Apriltzi – an administrative amalgamation of two-three not very well linked villages, Apriltzi is not a very suitable starting point. To reach the path up to Pleven mountain lodge, you have to cross the entire Vidima neighbourhood (6-7 km) down a barren, sun-beaten road. We got lucky hitchhiking, but it’s easy to waste a lot of time here in the very beginning stages of a hike.

Botev peak – the tallest peak in Stara Planina is rounded, but offers reasonably awesome panoramas. Houses a huge meteorological station with a radio tower. It’s best for a quick rest and for munching on your packed lunch. 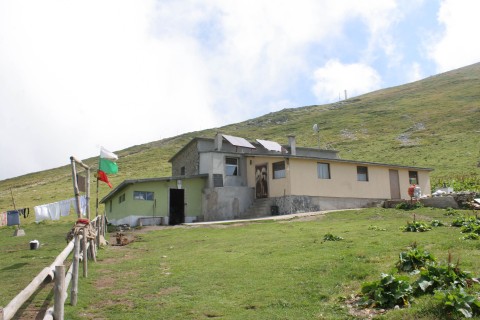 Hut “Hristo Botev” – a small house with fifteen bunk beds, the hut is half an hour below the peak in a picturesque region and offers free WiFi, which is surprising and quite useful. Can do in a pinch for sleeping, although huts tend not to have the full amenities of mountain lodges.

Pleven mountain lodge – a well-supplied and well-designed lodge with hot water, bathrooms on every floor, WiFi and cable, run by experienced and pleasant mountaineers. There are sleeping rooms of 8-12, but also private rooms for 2 or 3. The cafeteria’s terrace offers great views of Botev peak and the Northern slopes below it.

Ray mountain lodge – built overlooking the canyon called Dzendema (“Hell”), Ray mountain lodge, whose name means “Heaven”, lives up to its monicker – on a small plateau below the Raisko Praskalo waterfall, the lodge can be seen from miles away from the slopes above it, enticing the weary traveller hours before he arrives there. Toilets and showers are housed in separate buildings outside the lodge, and the toilets are squatters. The water tap is also outside. They make a wonderful cup of tea, there’s hot food, and the sleeping rooms house 8-12 each.

Vasil Levski mountain lodge – nestled in the forest on the South side of the mountain, this lodge is smaller than the other two, but elicits the same feeling of hospitality. There it is reinforced with a huge cabbage salad and fresh eggs for breakfast, laid by the resident hens. Bedrooms are for 8-12, the bathroom is in an addition to the lodge and the toilets are separate (and squatty).

The Raisko Pruskalo waterfall – the tallest waterfall on the Balkan peninsula at 124.5 m is a half hour’s hike above Rai mountain lodge. You can reach it once you’ve checked into the lodge for the night. The waterfall is most active in the spring, and dries up to a trickle in August, although it’s never completely dry.

Golyam Kupen and Malak Kupen – 10-15 minutes away from Rai lodge lies the cut pyramid of peak Malak Kupen, which seems to have been created as a vantage point for its more rugged neighbour, peak Golyam Kupen. Golyam Kupen is hard to reach in the summer, but Malak Kupen is ideal for a picnic, a rest or an evening drinking.

Petolachkata – a well fertilized plateau whose name means “the five-ray star”, it’s the crossroads for five different paths, including those for Vasil Levski lodge, Ravnetz lodge, Botev peak and Rai lodge. You will know it by the five pylons with signs on them.

Kalofer – Ray lodge (4 h.) – easy climb along a country road, then through fields, the path concludes with a seriously steep hourlong climb just before Rai lodge which leads to the North side of Malak Kupen peak.

Rai lodge – Botev peak (“Tarzan’s path”) (4 h.) – the path is lots of fun, but it is steep and dangerous, especially when wet. It climbs in zig-zags, aided in two places with a steel cable. After those two steep alpine stretches, which can’t be climbed with walking sticks in hand, it levels off and gets rockier, making the last hour a bit unpleasant due to the rocky path just below Botev peak.

Apriltzi – Pleven lodge (2.5 – 3.5 h.) – the hardest part of this segment is the 6 km on foot through the Vidima neighbourhood, which is hot in the summer. Find someone to give you a lift to hydro plant Vidima or divinate the whereabouts of the phantom local public bus and the rest is easy. The path takes a country road for about an hour, then gets steep through the woods for another 1.5 h before coming out at Pleven lodge.

Pleven lodge – Botev peak (3.5 – 4 h.) – the climb follows a ski slope, then continues above the tree line through consecutive hilltops. The first half is steep and rocky, then it gets easier. You can reach Hut Hristo Botev in about 3 hours, from there to the peak is another 30-40 minutes following the winter markings (yellow/black painted poles) along a dry riverbed.

Levski lodge – Balkanski Rozi lodge – Hubavec lodge – Karlovo (2 – 3 h.) – the path follows Starata Reka (“The Old River”), steep and wooded. The upper two segments (before Hubavec lodge) are quick and easy, you could even take them running if you’re up for the risk. The path from Hubavec lodge to the city is dustier and rockier, and gets really hot in the summer. Once in a while you will be treated to excellent views of Karlovo.

A shepherd’s hut below Petolachkata

Ray lodge – Petolachkata (3 – 4 h.) – generally a level segment, mostly in the open above the tree line which undercuts the ridge from the South side. The path leads past a shepherd’s hut and caution is warranted when encountering his herd, especially if he’s not with them. 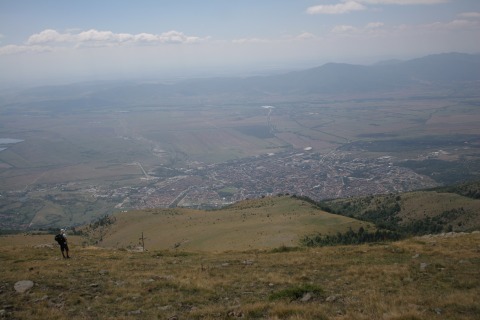 Petolachkata – Ravnetz lodge – Karlovo (3.5 h) – The path leading from Petolachkata through Ravnetz lodge consists of three parts. The first (1 h) is very pleasant, bare, almost entirely flat and consists of lots of walking among low shrubs following summer or winter markings. The second part (1 h) is a rather steep, rocky and sliding slope, which is torturously difficult to traverse. The excellent view of Karlovo is worth it for the first ten minutes, then it gets unpleasant. Ravnetz lodge is not very easy to find, even though the winter markings are newly restored. From there the path leading to Karlovo is not the most pleasant either – dry, rocky and dusty all the way down. It’s even worse if it’s hot. The last leg of the trek lasts about 1.5 h but feels much longer.

Map of the routes described above