Reblog: “Protesting With The Police On Your Side”

It seems the world is out on the street, protesting for change. From Taksim Square in Istanbul, through the streets of Athens and Rio to the catastrophe in Syria one theme stands out: protesters clashing with aggressive and often brutal police and government forces.

The exception to the rule turns out to be a little corner of Europe, a tiny and often forgotten part of the world facing its own large scale social unrest. Since the 14 June Bulgaria has been out on the streets. Every day since, tens of thousands of protesters have been filling the streets of the capital Sofia along with numerous other cities. 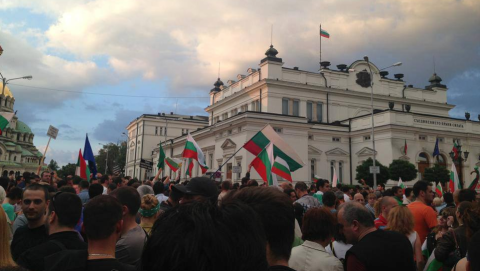 Bulgaria is in the throes of a political crisis (some background). The interim cabinet’s appointment of a college dropout with known Mafia ties as head of DANS (the Bulgarian NSA) sent thousands of Bulgarians onto the streets in protest. Not being directly involved, I have a few quick comments before I quote a few friends who are there right now.

Despite the heightened atmosphere, so far the protests have been overwhelmingly peaceful. Bulgarians are exercising their right to dissent, and the fundamental democratic tenet of allowing them to do so without interference is being upheld by the government. This is a seemingly rare occurrence in a world where the US, Brazil, Turkey and, I’m sorry to say, Canada, have recently shown aggressive responses to peaceful protests. Not only that, but the police is largely sympathetic and refuses to be drawn into confrontations or ordered around by the government. Just today the police union released a declaration of support with the protests:

The union of Ministry of the Interior staff wishes to remind the politicians and assure Bulgarian society that MoI officers are not private employees serving the interests of one or another political party or coalition. MoI officers are part of Bulgarian society and are fully and solely in the service of public interest. We fully support the equitable social and economic demands of the citizens. Our friends, relatives, and members of our families are among the protesters.

It is with the least motivation that employees in the Ministry of Interior stand with face and chest in front of one or another party headquarters and defend the political elite from the “love” of the people.

(Translated from this Union declaration)

The protesters have returned the respect granted to them by police and security forces in spades. Boyan Benev, writing for HuffPo, had this anecdote:

…gathered on the Eagles’ Bridge yesterday evening I saw a friend wandering through the crowd carrying two cases of 500ml mineral water. I made a quip about him stocking up for the protest when he replied:

“This water isn’t for us, it’s for the police. These men and women have been standing here in the 30 degree sun all afternoon and have shown us only respect. I think it’s time we showed some back.”

END_OF_DOCUMENT_TOKEN_TO_BE_REPLACED

This post is a reprint and translation of an article by Georgi Deyanov that first appeared on Bulgarian journalist Ivo Indjev’s blog last year, in connection with the ecology protests of 2012. It is a precursor to my extensive analysis of the situation in Bulgaria and the current protests.

One generation woke up starved for civil life. These past few days it screams with lungs burning from painfully invading freedom.

We are unhappy because we’re under-slept. No, we cannot be drugged with inane Turkish soap operas. It’s inconvenient, but we do not think through the TV. The Internet provides infinitely more fitting content on request, our reporters are thousands and constantly transmitting on location. Your desire to meet and “reason” with our “organizers” makes us laugh.

Your worst nightmare has come true – the dragon of the majority is able to self-organize. Spontaneously, sporadically, rapidly, efficiently. Without the possibility of countermeasures.

Your mistake was to go for the forest.

The Bulgarian’s relationship with the forest and the mountain is close and magical. Forests and mountains have always been the last refuge of freedom. Our villages, plains and rivers have been conquered, but our forests – never. What do you expect from the beast of the disgruntled majority, placed in a deadlock? Survival instinct drove us out into the square. And this time it’s serious.

END_OF_DOCUMENT_TOKEN_TO_BE_REPLACED

You are currently browsing entries tagged with protest at Blazing Bulgaria.